Cate mooed with her.

Millie giggled at the old joke; a pure, authentic song.

Millie continued to pet the cow’s cheek. Cate stroked the other, looking for signs of impatience in the otherwise stoic animal, searching its blank knowing eyes for knowledge of her charade. What made her want to release the scream that had been lodged in her throat was how Millie, sitting comfortably in her numb arms, was so far away from screaming. Millie, who had every justification for adding her shrill voice to the one behind them.

Three-years-old, Cate mused, as she transferred Millie from one desensitized arm to the other, careful not to break contact with the cow; three years. She imagined the retirement banner, growing longer and larger as the idea cooked in her mind, advertising the pitiful number.

Cate was grateful for the brown-and-white animal’s presence, and more so, was grateful that the cow was the first thing Millie had noticed. She wouldn’t have thought to mosey on over to the cow; instinct—training—would have told her to immediately transport the disheveled little girl to her car, where they would have waited for the next routine steps. And then she would’ve known something was wrong—would’ve started screaming.

A scream perforated the ambience: a cocktail of pain, fear…and perhaps, a note of anger.

“Mooooo!” Cate issued her loudest impersonation yet. Millie echoed her sentiments, prolonging and exaggerating the bovine language until it devolved into more giggling.

Another scream smothered the laughter, and for a moment, Cate thought she felt Millie stiffen, thought she saw registration on the little girl’s suddenly sagging face.

“Moo mooooo moo moo moo mooooo moo,” Cate interjected, the single word spoken in the rhythm of conversation. She fixed upon Millie’s eyes, hoping the little girl would take the bait, ready to shift her little body should she decide to go peeking behind her back toward the scream.

Millie’s bowed lips glistened, saliva pooling as she gathered her thoughts about the conflicting sounds. Cate readied her own lips with another string of nonsensical cow-speak, when Millie broke out of her trance and fired off a meaningless statement of her own: “Mooooo mooooo mooooo”—laughter—“mooooo moo moo moo.”

Relieved, Cate kept the dialogue flowing for as long and as loud as was necessary to beat the intermittent screaming from Millie’s ears. As their banter rose and fell with the outbursts behind them, she imagined how the others must have seen them: vulnerable backs; a revolving red light highlighting Millie’s arms wrapped comfortably—Or is she in shock?—around her neck; mooing from unseen lips; the cow itself unseen, blocked by their bodies. How surreal it must have appeared to them.

How grotesquely real it was to her.

How beautifully real it was to Millie.

This is your first time, isn’t it? The scream she struggled to keep deep down in her gorge threatened to erupt their cozy huddle. It occurred to her that this cow—not the pair grazing further down the fence, dangerously close to the break; not the calf flanked by several adults; not the others standing nonchalantly, laying nonchalantly, living nonchalantly; not the countless others that might have been a blur in Millie’s passenger window—but this cow, might very well have been the very first cow Millie had ever seen.

Cate mooed, and wondered if Millie could detect the underlying melancholy. You don’t need to meet a cow. She desperately wanted to assure the little girl. Not now. Not like this. She was certain that when Millie was one day no longer a size fit for one’s arms—there’s no guarantee of that—she might learn to hate the cow. All cows. The way Cate hated them for what they had done to Millie—to her.

The human sounds behind them were less frequent now, quieter: the pain, the fear, the anger—if ever there was—giving themselves to realization. Cate hoped Millie’s mother would soon forget how to scream; hoped her mother forgot her daughter’s name. This line of thinking was drenched in selfishness, but Cate had accepted it…for now. It was just that she and, more importantly, the cow, had worked so damned hard to keep Millie occupied.

Or are we keeping the cow occupied?

She looked into the animal’s eyes: glossy black islands surrounded by thin halos of bloodshot white. Pulses of red light, rotating like an angry lighthouse—an eye of its own—searched those eyes, much as Cate was doing now, for knowledge.

Cate focused on Millie’s silhouette within the animal’s sheeny eye: Do you understand? A voice answered the question. Cate couldn’t make out the words, only the harshness of the voice. She sensed an approaching presence and immediately understood what was happening. In a voice tailored for Millie’s benefit, Cate said, “Please, don’t come any closer,” and resumed mooing along with Millie.

“Officer?” The voice didn’t sound so harsh. Perhaps it hadn’t been at all. Perhaps, Cate decided, she was prejudiced against voices outside of her and Millie’s precious bubble.

“I said don’t,” Cate said in her rosiest voice.

“Officer, I need to examine the little girl,” the soft voice said.

The well-meaning plea incensed Cate. She’s fine. I checked her when I pulled her out of the car. Some scratches, a few bruises, but she’s fine. I checked her. And I named her. She knew someone close to Millie must have known her real name, but for tonight, in her arms, the little girl would take the name of the first girl Cate had lost on the job.

Footsteps crunched behind them.

“Don’t,” Cate emphasized, momentarily breaking her character of utter serenity. Before the intruder could interject, she added: “I… just give us a few minutes, okay?”

Once again, she caught Millie’s silhouette in the cow’s eye. Do you have a father? Grandmother? Grandfather? Uncles? Aunts? Anybody? Do you know your name?

What would become of Millie when Cate decided enough “few minutes” had elapsed?

What would become of the little girl when the cow was gone?

The intruder’s footsteps—a paramedic just trying to do her job—retreated, but Cate sensed she hadn’t gone far; Millie did need to be examined.

She realized the screaming had died. It made sense to her, not because the outcome was inevitable, but because the paramedic now had time to check on the only survivor.

But they still had a few minutes.

And so Millie mooed.

Cate mooed with her. 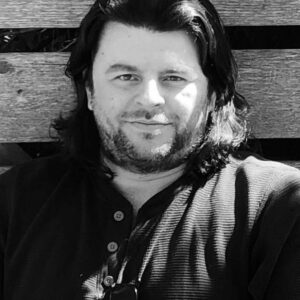 ALFREDO SALVATORE ARCILESI has spent a decade penning award-winning short- and feature-length screenplays, while working as a full-time artisan baker. His short stories have appeared in over 50 literary journals worldwide, including the White Wall Review, Spry Literary Journal, and The Penmen Review, and was a finalist in the Blood Orange Review Literary Contest. In addition to several short pieces, he is currently working on his debut novel.